Made to Explode by Sandra Beasley 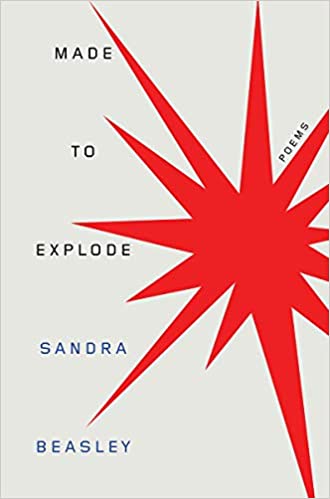 Just six years ago, poetry pulled me back into the fold- a writers’ retreat on the sultry southern island called Ossabaw. Neil Shepard has the poetry faculty at the time and at the end of the five days, he made a list of books for me to read and circled Sandra Beasley’s Count the Waves. I had not read a single poetry book in fifteen years. To have the drought broken in such a way! Her use of mathematics in those early poems still resonates with me today.

When I was asked to review Sandra Beasley’s newest book, Made to Explode, I hesitated. Would my early affection for her work cloud my judgment? Perhaps.

I picked up the book and read the list of poems, several titles pointed to exploring the anger of female whiteness. As a professor and workshop faculty member, I have seen a new genre emerge: much like the “bad boyfriend” poem party crashing into intro poetry classes, the angry white woman apology poem is the cliché drunk guest no one wants at workshops.

Beasley, however, is no workshop flunky, and her exploration of the construct and historical responsibility of a white woman in today’s American culture is both nuanced and surreal. In her poem, “Epic,” she dares ask, “Who am I/ in these stories?” She does not flinch; instead, she asks herself what role does her own history and sense of self play in the larger historical landscape? Particularly chilling, in “Still Life With Sex,” she asks the reader to place themselves in the question; “We are trying to make space and hold it open./ The skull that grins amongst grapes grins at us.”

This collection of poems stands apart while looking head-on at the identity crisis of our current politics. But she does so without virtue-signaling and self-righteous cliches that so many other poets are guilty of when they attempt to wrap words around the tragedies we both are culpable for, and bystanders in, at the same time.

The book opens with “Heirloom,” which braids the story of Ore-Ida tater tots to her own father’s relationship to food. “Lo, what is cooked to mush./Lo, what is peppered to ash. Lo, the flavor/ rendered as morning chore— that this, too, is a form of love.” What’s more American than tater tots? This slow opening begins the promise that we will unfold our own relationship to what’s American and what legacies we take on out of necessity or circumstance. Followed up with a delicate yet vivid tribute to Long John Silver’s fast-food chain of the 1990’s, I was transported back to my own ska punk days, ringing the bell after walking the rope bridge, a teenager so full of hope and rage.  Stories of food fill these pages, braced against what it means to be an American. What ordinary people experience in simple joy, and in vital reckoning.

In “Nostalgia,” she recalls an indie pop band named after the murdered child Emmett Till; the band name, Emmet Swimming, attempts tribute but misspells Emmett’s name, and in its happy pop sound misses the gruesome reality of a dead child’s open casket.  The poem deftly addresses the irony of affluent white teenagers singing pop songs while using the name of an infamous victim and tries to make sense of the speaker’s place in it. Beasley follows up in a second poem, “Black Death Spectacle” a golden shovel form poem after Gwendolyn Brooke’s poem, “The Last Quatrain of the Ballad of Emmett Till”- “Our tools seduce. Ask what the shovel is/ burying. Know that the paintbrush sees only a/ canvas: Make it yours. Make it pretty.”

The geography of this book time-travels two hundred years, but never leaves the boundaries of the American state of mind (even when slipping away to a Welsh mountain range while making orange juice). The road trip the reader takes through the book, to Florida, South Dakota, Washington DC…..the poems are postcards mementos of Beasley’s life, much like the photo of her grandmother that she contemplates in “Winter Garden Photograph”. But she also explores the viral phenomenon of the sniper/ mass shootings in “Sniper Dance” “Our dance was discernible only in transition: casual gait;/casual gait; casual gait; then the head ducked, swerve to the/ left, a bag hitched— to throw off his aim, wherever the sniper/ might be waiting.”

Next, she tackles the exploitation of an image of American Native in, “Self Portrait with George Caitlin.” “So much taken under the decree/ of numbered days,/the promised dwindling of noble/ savages. This occurs to me/ not at all in 2002, when/ (Ethnic – White – Suburbia)/ I buy postcards in the gift shop/ from a show I don’t enjoy”. We as readers are left to reflect on our role as consumers of this exploitation.

And under all of these layers, there’s another: the affliction of food allergies. “Death by Chocolate” hit home for me and reaches back into previous poems, exploring the relationship to death that many foods have for the author. Then “The Accommodation” with the line, “First time, I tasted/ a kind of kindness. Then/ came my second reckoning.” Placed later in the collection of poems, as a reader, I had to revisit the earlier poems that food was a part of, and the new context glimmered like a secret the poet is sharing with the reader. A bit of death hides in the pages of history, and that death is not just; it is more a second reckoning. Suddenly Jefferson’s macaroni pie and peach marmalade are not just noodles and cheese and peaches, and maybe they never were.

The last words of this book, “Nobody did this to me,” still rings in my ears weeks after hearing it. Bits and pieces of the book tuck themselves in like matches, ready to ignite, but they're set in odd places. I am eating breakfast when the words of the poem “Monticello Peaches” appear in my bowl: “There are two types of peaches:/ one to which the stone clings,/ shredding to wet threads,/ and another allowed to lift clean.” These tender bites from a story about Jefferson’s peaches, but also the suicide of one of his slaves and the punishments for stealing given at his farm. I am haunted by the childhood images, woven in with National monuments, and tied together with twine. These matches are bound to fence posts, between the clean plates in the cabinets, and hiding in the clean laundry, folded up like paper cranes. Sandra Beasley’s poems strike together, as the title suggests, ready to explode.

Made to Explode is a complex book, written with exquisite craft. It tackles a series of subjects not easy to talk about in polite company, shining a light on an intersection where we, the reader, may choose a cab, to figure out which way to leave -- or maybe we like it here, too.